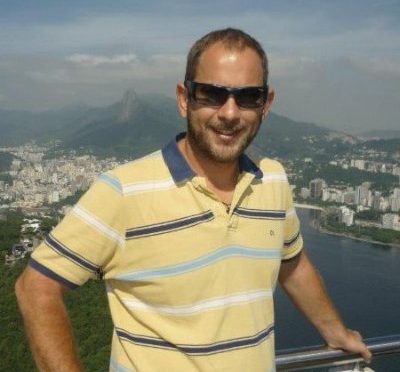 Welcome to my personal blog.

My name is Vangelis Simonidis and I come from Athens Greece.

My passion as you can imagine is remote control sailing and model boat building.

I started scale modeling in an early age building plastic kits as most of the scale modelers did in their childhood.

My mentor and the person who inducted me into the world of scale models was my father.

He was a founder member of the Greek Modelers Society back in the ‘60s and a keen scale modeler.

In the late ‘60s he had the unique opportunity to turn his hobby into a full-time job something most people can’t do.

During my childhood, my father used to take me in his workshop once or twice a week, and I had the chance to play with his tools and try to build my own models from scratch.

Most of the times what I was building was something uncertain but with his help and his advice I improved my skills and managed to build my first model boat… the ancient raft of Odysseus…!!!

Years was passing by and I was always trying to get involved more actively with boat building.

In the late ‘80s I started dinghy sailing with Optimists and Lasers in a local Yacht club.  During an excavation in my dad’s  storehouse we founded a marvelous wooden planked Marblehead called “Skippy”. It was built by my father somewhere in the early ‘70s and it was fairly sailed by him back then. We decided to restore it and hit the water again after so many years.

The spark was given and the rest is just history… 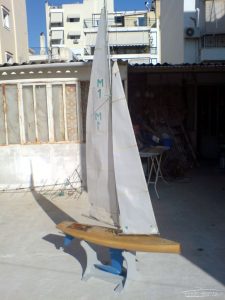 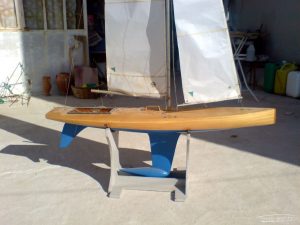 In 2010 I Joined the Hellenic Navy-modelers Society an online forum dealing with model boat generally. www.rc-boats.gr

I found a lot of people with the same interests to me and  with some new friends we tried to gather all the sailboat modelers in Greece in one common group.

We did a great job as we found a lot of old and inactive modelers with very good model yachts and also some really interested newcomers.

We built some new models like RG65, IOMs and Marbleheads and we tried to organize some fun regattas.

Year by year we improved our techniques and knowledge base. We found more skippers willing to participate in our regattas, we built better boats and supported extremely well the newcomers.

In 2012 we established the Hellenic RG65 Class Association.

In 2013 we organized the “RG65 European Masters” with a lot of European participants and one participant from Argentina who won the championship. 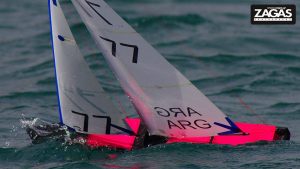 Nowadays we have a very strong Marblehead fleet with over 20 active skippers and a very well organized annual championship.

Considering myself today, I am building my own sailboat models from scratch and participate in the Hellenic championship with great success.

My annual finishing positions are the following: